GraphQL Performance issues and how to handle them

One of biggest GraphQL flaws is missing of some basic implementation know from which are crucial for application performance. A simple GraphQL server comes without a built-in caching or batching mechanism. This might cause some problems for you apps.

GraphQL is about querying for specific fields on objects. The fields are intended to be stand-alone functions which means that unsophisticated GraphQL server might produce redundant calls to issue new database requests each time a field is resolved.

Let’s take a simple GraphQl Blog as an example. Our blog will use pagination to load faster, let’s say that we want to display 5 at once.

We want to get our posts along with their authors names. Our author’s details is a standard ‘user’ fields that has its own resolver so we need:

But what if these posts have comments? Let’s say that each blog post has 2 comments and of course each comment has its author, this gives as:

This gives us 21 calls. What if we have 10 or 20 comments under each posts? The number of calls will skyrocket and this will cause serious issue with the application loading time.

Fortunately there is a solution! Dataloader is a utility developed by Facebook dev team that lets you batch and cache database calls.

Batching is DataLoader’s primary feature. When Dataloader sees that you’re hitting same table multiple times, it’ll batch all calls together i.e. 5 blog posts’ authors & 10 comments’ authors would be batched in a one call.

To get started you need to create loaders by providing a batch loading function.

The function accepts an Array of keys and returns a Promise which resolves to an Array of values. You need to load individual values from the loader. DataLoader will merge individual loads which occur the same time and then call your batch function with all requested keys.

Caching is another DataLoader’s feature. Each DataLoader instance represents a unique cache and when Dataloader detects that two blog posts, comments or their combination have the same author instead of making a new database call it will reuse the object it already has in memory.

If you want to make sure that your application running as smooth as possible I highly suggest trying DataLoader. Read more about the implemenation of DataLoader check its GitHub repo or watch “DataLoader - Source code walkthrough” by Lee Byron, one of the GraphQL creators. 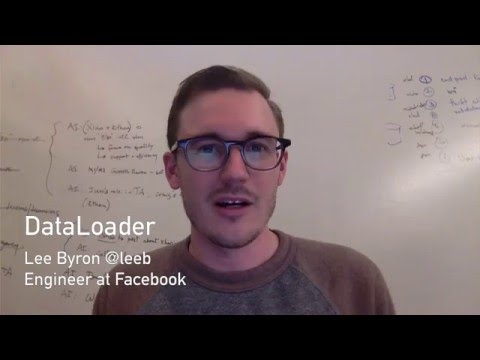